During my stay in Ogasawara, I was fortunate enough to encounter four species of dolphins, three of which I was able to photograph.

First up were pan-tropical spotted dolphins (Stenella attenuata), which we encountered several times. Pan-tropicals are a lot of fun to watch from the boat, as they can be really active and playful, but they're the total opposite in the water.

There can be a few dozen swimming like crazy around the boat, but the second you get in the water...poof! They vanish quicker than kegs at a frat party.

I've seen this particular species of dolphin in many places around the world. Their temperament varies from location to location, with some populations being highly approachable, and others just downright rude. In Ogasawara, they're somewhat standoff-ish...generally ok with boats, but not easy to approach in the water.

There was also a second species of bottlenose...Indo-Pacific bottlenose dolphins (Tursiops aduncus), which are relatively slimmer, and a heckuva lot more friendly than their truncatus cousins...at least in these waters. They're accustomed to boats and people, so if you're a decent swimmer, you can swim along with them...if they're in the right mood. 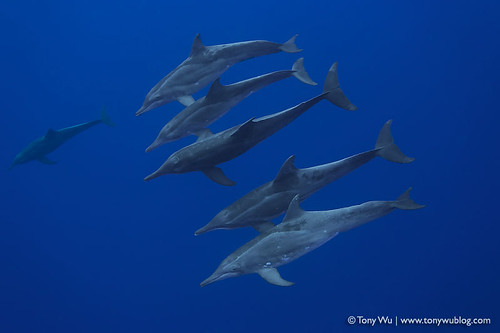